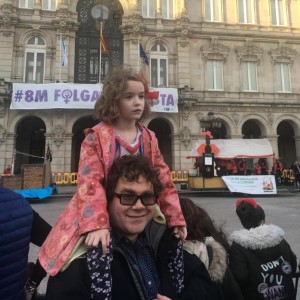 Michael is the CEO and Co-founder of myAmigos. Originally from Australia, he now lives in A Coruña which he loves. He has a background in theatre making (acting, directing, lighting design and stage management) and loves helping people. He started myAmigos because he was sick of relying on his friends and Google Translate while he continues to learn Spanish - very slowly. (Sometimes he uses myAmigos just to have an impromptu Spanish conversation class!)
FREE packages available now!

Can You Afford Not to Use Us? How We Save Expats Time, Money and Stress.

I lost my glasses a little while ago. That’s a long and embarrassing story. You’d need to buy me tapas to hear that one. I hadn’t had my eyes checked for many years. I have been in Spain for a couple of years now. My Spanish is much better than when I first arrived. I thought I can do this by myself! What resulted was a shorter, but still embarrassing story that I am happy to share. Spoiler alert: using myAmigos would have saved me a lot of time, money and stress.

This restored my faith that myAmigos is the best on demand interpretation service for expats. I learnt a number of things:

The Experience: or “Is it ok to tip your optometrist?”

TL;DR My Spanish is not as good as I thought it was. I made the optometrist’s job much harder than it needed to be. I cost myself a lot more time, money and stress than if I had have just used myAmigos to help.

I booked an appointment online. COVID has actually helped expats in Spain in this regard I think. Before it was harder to get information and appointments online in Spain. Online gives me time to process the language, use Google Translate and to try to work out what Google Translate is saying. Sometimes it’s easier to read the Spanish, than the strange English it shows me.

I hadn’t found my spare glasses at this point, so I went to the appointment unable to see clearly, which added to my stress and inability to communicate. I try to get “Lo siento, mi español es muy mal.” out as early as possible in any conversation I have. I know that’s not grammatically correct. That enhances the point I am making. This is usually offered as an explanation for why I am taking so long to answer a question. In this case the question was “How can I help you?” (In Spanish of course). The response to my statement typically follows these steps:

Have you experienced this too?

In Australia, you do the eye test first. So, that’s what I asked for. She tried to explain that I had to choose the frames first. A slight challenge to my assumptions. A departure from the process I had rehearsed in my head. My stress levels rose and Spanish comprehension fell. Not to worry. I had chosen what I wanted on the web-site before coming in and the print-out from the booking had helpful words on it. I wanted two pairs of glasses: one as a spare so that I wouldn’t have to wander around half-blind ever again, and one like the ones that I had lost which darken in more light so I didn’t have to swap to sun glasses.

Well, this was very confusing to her. Because when I saw the word “progresiva” on the web-site I thought this was describing these lenses. So here I was asking for one set to be mono-focal, and the other multi-focal, and she was trying to understand why I would want that. We got it sorted out eventually. With me saying “gafas” waving my hands to signify magic and then saying “gafas de sol” and “el mismo”. She said the word “fotocromaticas” and that made sense to me.

She explained to me the dots system for the different prices for the frames, which I understood straight away. Ok, back on track! I was surprised by how few frames there were to choose from. She kept asking me “If I was ok.” I am one of those who prefers to browse without assistance so I just kept saying “Si, es vale.” Eventually she came over and showed me the drawers of other options – which is what I think she was trying to tell me all along. I sheepishly found two frames and passed them over.

Ok. I’ve been here way longer than I thought the whole operation would take – and I am sure the optometrist is thinking the same thing. But, we are getting somewhere. Eye Test time. Oh no! I’ve looked up the word for blind before I came in, but now I’ve forgotten it because of all of the mistakes I’ve already made. You see, I’m blind in my left eye. I practiced saying that sentence a few times before going in, but now I’ve forgotten it. “Mi ojo a la izqueierda no vista” I garble. Why is “left” so hard to say here?

You would think that this means eye tests would take half as long, but, no. Such a statement piques optometrists’ interests. This is apparently the case whether you can speak the same language effortlessly or not. She then tried to ask about how blind I was, when it happened, how it happened, etc. I hadn’t prepared answers for this, because I thought we would just skip over it. I was impressed that I could understand the questions, but I didn’t really have all the words I needed to answer properly. I manage to communicate part of the answers – enough to either satisfy her or frustrate her to the point where she understood it was pointless asking me more!

She did the inspection tests, I didn’t understand the Spanish for puffs of air for the pressure test. But we muddled our way through. Then came the letter charts. Disaster! I sat down and all I could see was a big blur. She changed the lenses and asked better or worse, but all I could see was a big blur for both. I don’t know the word “blurry” in Spanish. Panic. I don’t want to get glasses that I can’t see through! We had already done the pretty hot air balloon and got that to look sharp at the other station. I couldn’t understand it. “Nada” is all I could think of to say. She changed to two other sets of lenses – “uno o dos?” “Nada” I’d reply.

Eventually she worked it out. I had fogged up the machine because I was wearing a mask. So she wiped it down and I could see through the machine. Ok now we were getting somewhere. I remembered the names of most of the Spanish letters – something else I’d practiced. But every couple of times she’d changed lenses it would be fogged up again. I had no language for that, but would just make cleaning motions and say “por favor”. Eventually we got to the right prescription. Phew!

I just wanted to be gone by this point. In fact I tried to leave the testing area, and she had to call me back to try the lenses in her mock-up glasses frames. I don’t remember ever doing that before and I don’t know what it was about. She asked me some questions and I just kept saying “Bueno” because I could see fine through them and that’s all I really care about. She then tried to explain to me about my prescription, but my brain was fried and I got a little lost. She explained to me at length that she was going to get the same prescription for my left eye so that they match even though I’m blind in it. I actually understood that part, because every optometrist I’ve been to wants to explain that to me because it’s unusual for them – but it’s normal for me.

I still can’t go. First, she has to write up the order. She keeps calling my “fotocromaticas” pair as “gafas de sol”. I haven’t collected them yet, so I hope they are lenses that change. There are loads of questions about this lens treatment or that lens treatment. I understand bits of it, but I’m too worn down to care, I end up saying yes to a lot of things I don’t think I actually need. I pay the deposit and go home exhausted and frazzled.

What if I had have used myAmigos?

They say “pride goes before the fall.” I thought I had enough Spanish to not need help. I’m glad I tried it, because I learnt that myAmigos can still be helpful for people who have learnt some Spanish and aren’t total beginners any more. Not only is it helpful, it would be valuable for people. If I had have used myAmigos I would have saved:

There really doesn’t seem to be a down side. Of course I am biased. If you want to find out how much time, money, and stress it can save you, sign up for our FREE packages here while they last.

I’ve finally found something where I am glad I didn’t use myAmigos!

As you may have already read on this blog, I recently tried to get new glasses without the help of myAmigos. That

It’s that time again. Each month we want to bring you some of the highlights from the myAmigos journey in our quest

Hola! Bienvenidos to our monthly newsletter. We did not send one last month because I was frustrated with the amount of emails filling up my inbox

This site uses Akismet to reduce spam. Learn how your comment data is processed.